This is a fairly straightforward post, just my accumulated short notes on what I extracted from the great book Meditations by the roman emperor Marcus Aurelius.

I also added a few of my own thoughts of how to apply his ancient wisdom to our daily life.

I summarized the key concepts and gave a short introduction to stoicism and Marcus Aurelius. 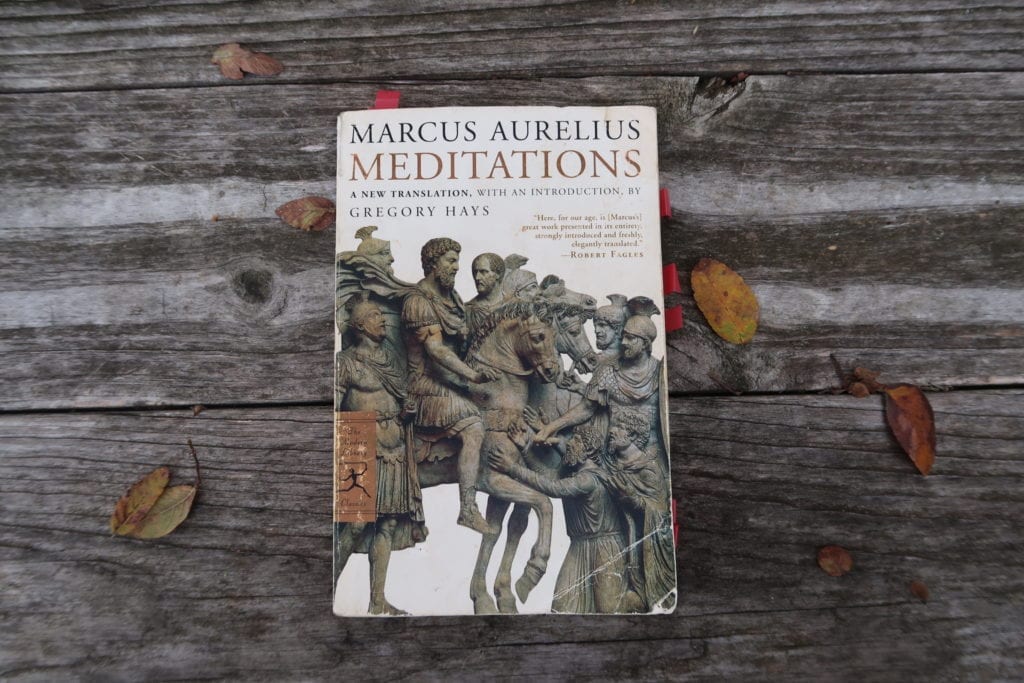 Medieval Greek: Ta eis heauton, literally "things to one's self" is a series of personal writings by Marcus Aurelius, Roman Emperor from 161 to 180 AD, recording his private notes to himself and ideas on Stoic philosophy. 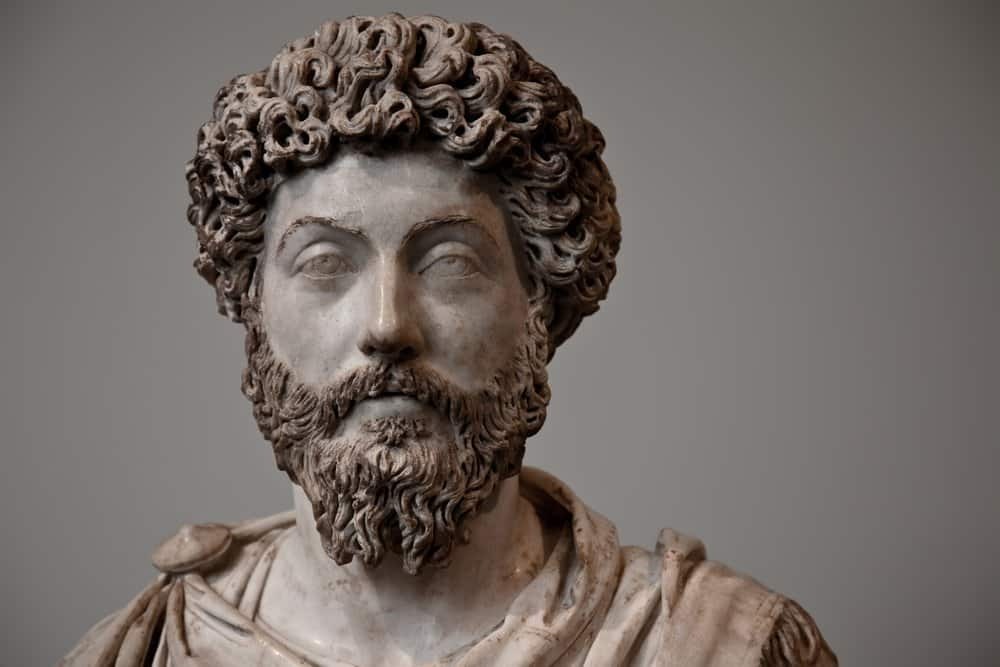 And the last emperor of the Pax Romana, an age of relative peace and stability for the Roman Empire.

Stoicism is one of the greatest and most popular and still relevant ancient graeco-roman philosophies, this quote sums up one of it's core ideas:

"If you are pained by any external thing, it is not this thing that disturbs you, but your own judgment about it. And it is in your power to wipe out this judgment now."

Key to the Stoic way of life is the idea that what is most important to our well-being, and conducive to a tranquil existence, is not what happens to us, but the inner discourse that accompanies the events of our life. As Marcus explains:

“You have power over your mind – not outside events. Realize this, and you will find strength.”

The Stoics believed that it was not the attainment of any external goods, be it fame, good looks, power over others, or wealth that were key to a good life, but rather a mastery of the mind.

External things, the Stoics noted, can come and go due to factors outside of our control so if we stake our happiness on any of these thing we give up control of our lives.

A person who prides themselves on their looks will inevitably grow old, a rich man can quickly lose his fortune, and the ever-changing nature of the masses can grow tired of a famous actress.

Unlike external goods, the Stoics believed we could control the way our mind frames, or interprets, the events of our life.

When something happens there is no single way to interpret it; there are too many stimuli, and too many alternative ways of looking at it.

Whether we are aware of it or not, in a sense we construct the manner in which we present the happenings of the world to ourselves.

The Stoics believed that we should take control of this fact and use it to our advantage.

We must realize that when we suffer a loss or someone treats us poorly we are not required to react with sadness or anger, but instead can learn to re-frame how we interpret such events thus minimizing the impact of negative emotions. This is of utmost importance for as Marcus put it:

“The happiness of your life depends upon the quality of your thoughts.”

Why read it now?

I find it fitting to read such a book in times like these, when a novel virus (SARS-CoV-2) is spreading amongst us, leading to a world-wide health crisis accompanied by distress and anxiety. 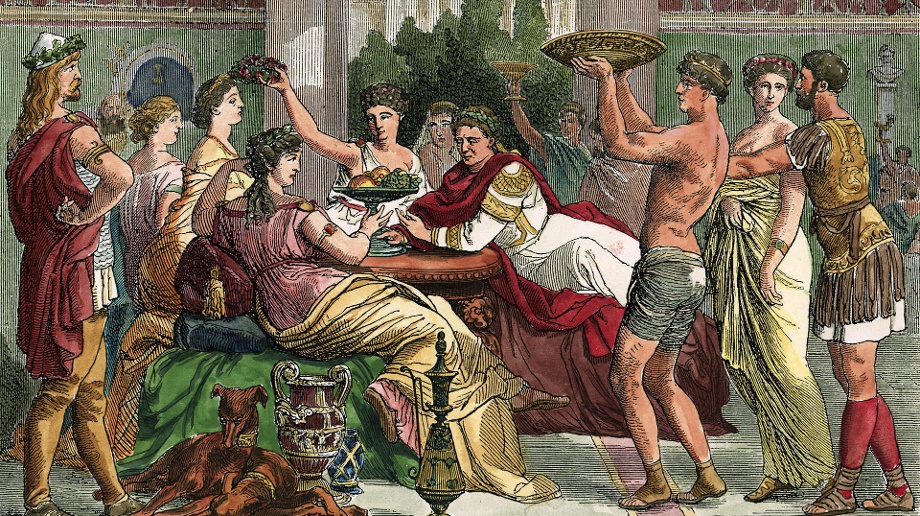 But what stress could a roman emperor feel? Perhaps you're thinking Marcus' life was filled with banquets and lounging around in his palace, being fed grapes by his slaves all day while being cooled off by another slave with a palm leaf.

Now in contrary: To say that Marcus Aurelius had a stressful life would be a preposterous understatement.

He ran the largest empire in the world.

He had a troublesome son.

He had a nagging and painful stomach issue.

There was a palace coup led by one of his closest friends.

Rumors that his wife was unfaithful.

The Parthians invaded the Roman client-state of Armenia, triggering

a war that would last five years.

The River Tiber had one of the worst floods in history, destroying homes and livestock and leaving Rome in famine.

Not-so-fun-fact: Marcus also reigned throughout the spread of a horrible plague, called the 'Antonine plague', after Marcus‘ family name Antoninus, which is estimated to have killed about 5 million Romans, equal to one third of the population in some areas.

So yeah. If you thought about reading this (almost 2.000 year-old) classic for while now, this is the time.

From my grandfather Verus I learned good morals and the government of my temper.

From the reputation and remembrance of my father, modesty and a manly character.

From my mother, piety and beneficence, and abstinence, not only from evil deeds, but even from evil thoughts; and further, simplicity in my way of living, far removed from the habits of the rich.

We all stand on the shoulders of giants

You only have the present, the past ist gone, the future is uncertain, the only thing in your control is the present.

To be vexed at any

thing that happens is a separation of ourselves from reality and nature.

Accept everything that fate offers and always make the best out of it, even if that means just bearing it truthfully and with honor.

Always act with an aim in mind.

Aim for a better universe.

Do nothing without purpose.

Nothing is evil that is according to nature.

"Do not act as if you were going to live ten thousand years. Death hangs over you. While you live, while it is in your power, be good"

See the beauty in life and nature.

Don't think about what others might think or contrive or what their opinion is of us.

Think only things with purpose.

Don’t think about what others do or say.

Make the best out of your life.

Your daimon should guide your actions.

Be pleased by your destiny.

Die like a ripe olive falling off the tree, thanking nature that produced it and blessing the tree on which it grew

"Put an end once for all to this discussion of what a good man should be, and be one."

Don't go on holiday, seek retreat in your own soul

Don't strive for praise, does an emerald become less beautiful without praise?

Beauty is good in itself like law and honesty and benevolence

Don't go for posthumous fame it means nothing

Don’t say I’m unhappy because this happened; say instead: I'm happy to bear tragedy, that can happen to anyone, nobly.

Don’t be unhappy about misfortunes

Be happy to bear it, which makes it good fortune. 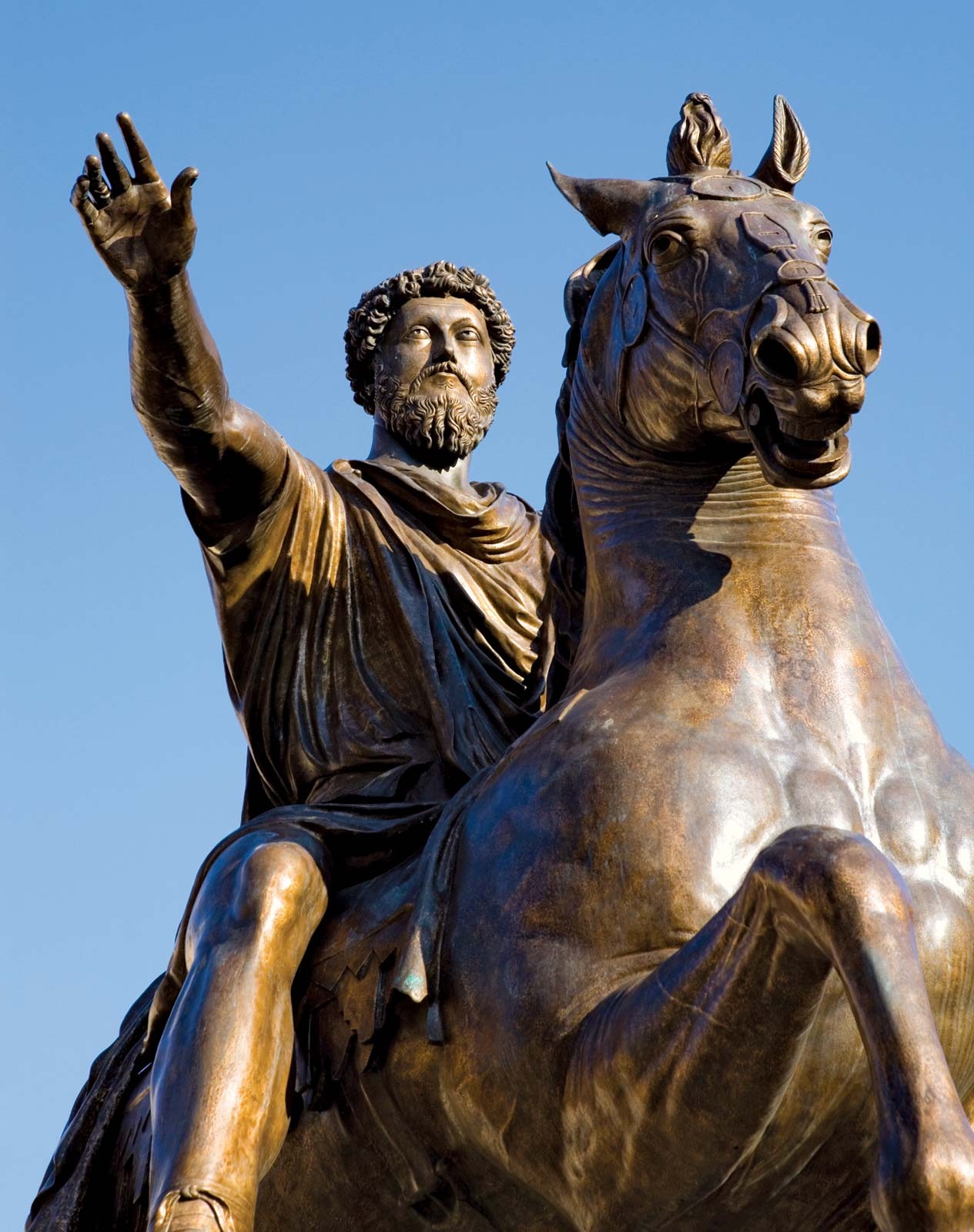 Be like a rocky promontory against which the restless surf continually pounds;

it stands fast while the churning sea is lulled to sleep at its feet.

I hear you say:"How unlucky that this should happen to me!"

Not at all! Say instead:

"How lucky that I am not broken by what has happened and am not afraid of what is about to happen.

The same blow might have struck anyone, but not many would have absorbed it without capitulation or complaint.

The universe prescribes things, sometimes it might be a bitter medicine, but it will heal you.

Everything that happens is suitable and needs to be that way.

Live in accordance with being and the universe, speak the truth and don’t complain.

A cucumber is bitter. Throw it away. There are beggars in the road. Turn aside from them. This is enough. Do not add, "And why were such things made in the world?"

At break of day, when you are reluctant to get up, have this thought ready to mind:

"I am getting up for a man's work. Do I still then resent it, if I am going out to do what I was born for, the purpose for which I was brought into the world? Or was I created to wrap myself in blankets and keep warm?"

But this is more pleasant...

"Were you then born for pleasure - all for feeling, not for action?

Can you not see plants, birds, ants, spiders, bees all doing their own work, each helping in their own way to order the world?

"Yes you do need rest: I agree.

But nature has set limits to this too, just as it has to eating and drinking and yet you go beyond these limits, beyond what you need. Not in your action, thought, not any longer: here you stay below your capability." The point is that you do not love yourself - otherwise you would love both your own nature and her purpose for you.

You don’t exist to stay in bed and be comfortable and warm, you are made for work and action and exertion.

Work hard and don’t show off.

Be happy to be human and work.

You exist for work and exertion.

Nature has put limitations on food, drink and rest but you go beyond.

Do not rest too much, do not eat and drink too much.

But don't stop with your actions with what you can do, nature has put no limitations on your ability to do work.

Develop your thinking and your character, be a good man and be as noble and virtuous as you can be, nature has set no boundaries for good.

Beware of corruption and malevolent thoughts, nature also has set no limits for evil and suffering. It is in your decisions that the world unfolds either in a direction of virtue and love or in a spiral towards suffering and betrayal.

Those who love their nature and their work exhaust themselves in it without rest, washing or food. 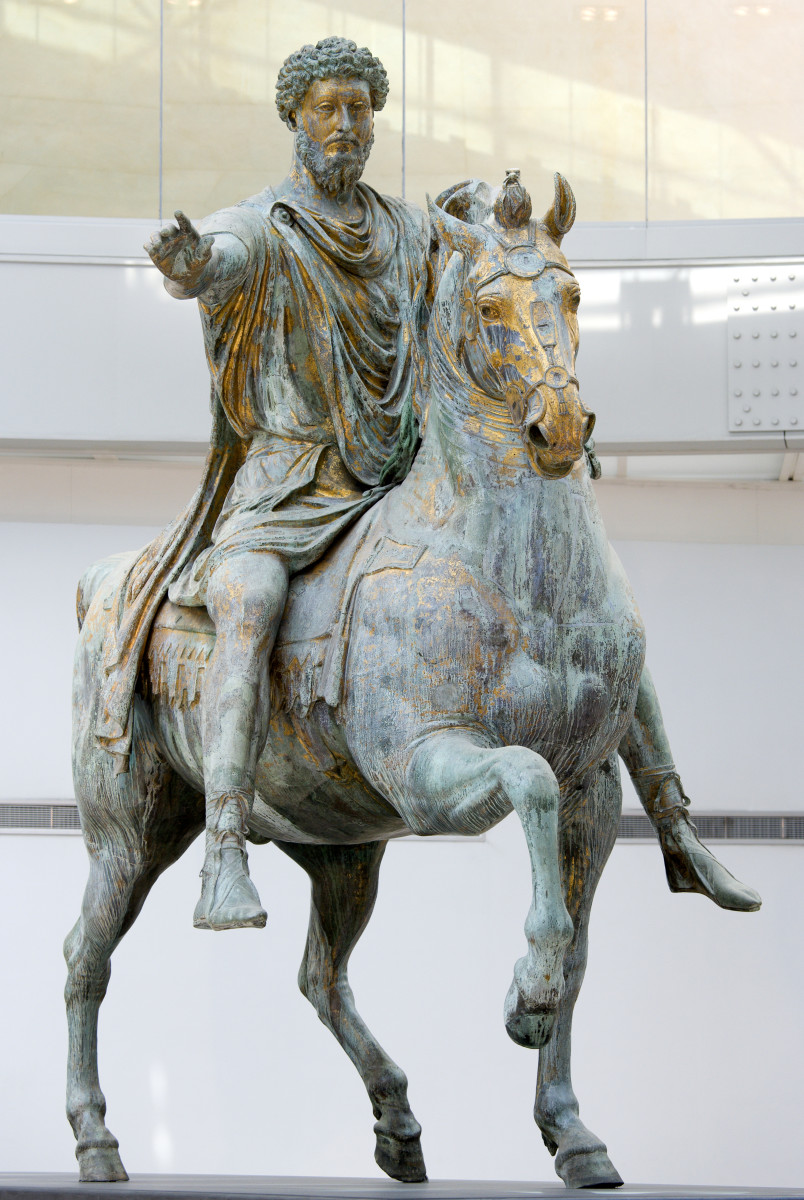 Be good, be dutiful, do what it is you need to do as a human.

Worship the gods and the ruling principle.

If what I did, did not hurt me or the common good, why worry?

The universe is either chaotic and without principles or goodness, in which case you need to be the good force in it

Or it is just and godly, in which case, act in accordance with your nature.

In any case, be good, accept what happens, bless fate and be social.

Don’t become angry with your fellow men, be rational or move away.

There is nothing that can force you to reject your inner conscience and guardian voice. Always act in accordance with your own inner nature and goodness.

Be satisfied with little.

"Things external to my mind have no necessary impact on it. Let this be your state of mind and you stand upright"

To recover your life is in your power.

Enjoy little things with humor and not a superior air.

Do things that are beneficial for society.

Don't let thoughts about your future disturb you.

Everything material disappears, fame is forgotten.

"I am not hurt except if i consider what happened to me to be evil, and it is in my power to not deem it evil"